In physics, chilling out isn’t as simple as it seems.

A hot object can cool more quickly than a warm one, a new study finds. When chilled, a warmer system cooled off in less time than it took a cooler system to reach the same low temperature. And in some cases, the speedup was even exponential, physicists report in the Aug. 6 Nature.

The experiment was inspired by reports of the Mpemba effect, the counterintuitive observation that hot water sometimes freezes faster than cold. But experiments studying this phenomenon have been muddled by the complexities of water and the freezing process, making results difficult to reproduce and leaving scientists disagreeing over what causes the effect, how to define it and if it is even real (SN: 1/6/17).

To sidestep those complexities, Avinash Kumar and John Bechhoefer, both of Simon Fraser University in Burnaby, Canada, used tiny glass beads, 1.5 micrometers in diameter, in lieu of water. And the researchers defined the Mpemba effect based on cooling instead of the more complicated process of freezing.

The result: “This is the first time that an experiment can be claimed as a clean, perfectly controlled experiment that demonstrates this effect,” says theoretical chemist Zhiyue Lu of the University of North Carolina at Chapel Hill.

In the experiment, a bead represented the equivalent of a single molecule of water, and measurements were performed 1,000 times under a given set of conditions to produce a collection of “molecules.” A laser exerted forces on each bead, producing an energy landscape, or potential. Meanwhile, the bead was cooled in a bath of water. The effective “temperature” of the beads from the combined trials could be derived from how they traversed the energy landscape, moving in response to the forces imparted by the laser.

To study how the system cooled, the researchers tracked the beads’ motions over time. The beads began at either a high or a moderate temperature, and the researchers measured how long it took for the beads to cool to the temperature of the water. Under certain conditions, the beads that started out hotter cooled faster, and sometimes exponentially faster, than the cooler beads. In one case, the hotter beads cooled in about two milliseconds, while the cooler beads took 10 times as long. 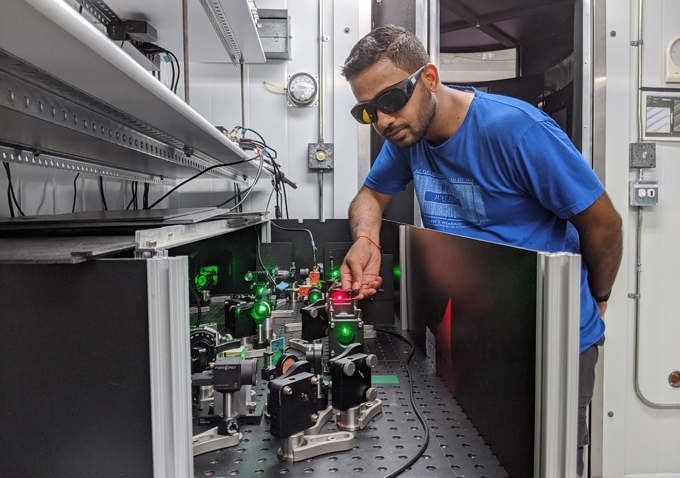 In a new experiment (shown, with researcher Avinash Kumar), a laser exerted forces on tiny glass beads to demonstrate that a hot system of beads could cool down faster than a cold one.Prithviraj Basak

It might seem sensible to assume that a lower starting temperature would provide an insurmountable head start. In a straightforward race down the thermometer, the hot object would first have to reach the original temperature of the warm object, suggesting that a higher temperature could only add to the cooling time.

But in certain cases, that simple logic is wrong — specifically, for systems that are not in a state of thermal equilibrium, in which all parts have reached an even temperature. For such a system, “its behavior is no longer characterized just by a temperature,” Bechhoefer says. The material’s behavior is too complicated for a single number to describe it. As the beads cooled, they weren’t in thermal equilibrium, meaning their locations in the potential energy landscape weren’t distributed in a manner that would allow a single temperature to describe them.

For such systems, rather than a direct path from hot to cold, there can be multiple paths to chilliness allowing for potential shortcuts. For the beads, depending on the shape of the landscape, starting at a higher temperature meant they could more easily rearrange themselves into a configuration that matched a lower temperature. It’s like how a hiker might arrive at a destination more quickly by starting farther away, if that starting point allows the hiker to avoid an arduous climb over a mountain.

Lu and physicist Oren Raz had previously predicted that such cooling shortcuts were possible. “It’s really nice to see that it actually works,” says Raz, of the Weizmann Institute of Science in Rehovot, Israel. But, he notes, “we don’t know whether this is the effect in water or not.”

Water is more complex, including the quirks of impurities in the water, evaporation and the possibility of supercooling, in which the water is liquid below the normal freezing temperature (SN: 3/23/10).

But the simplicity of the study is part of its beauty, says theoretical physicist Marija Vucelja of the University of Virginia in Charlottesville. “It’s one of these very simple setups, and it already is rich enough to show this effect.” That suggests the Mpemba effect could go beyond glass beads or water. “I would imagine that this effect appears quite generically in nature elsewhere, just we haven’t paid attention to it.”